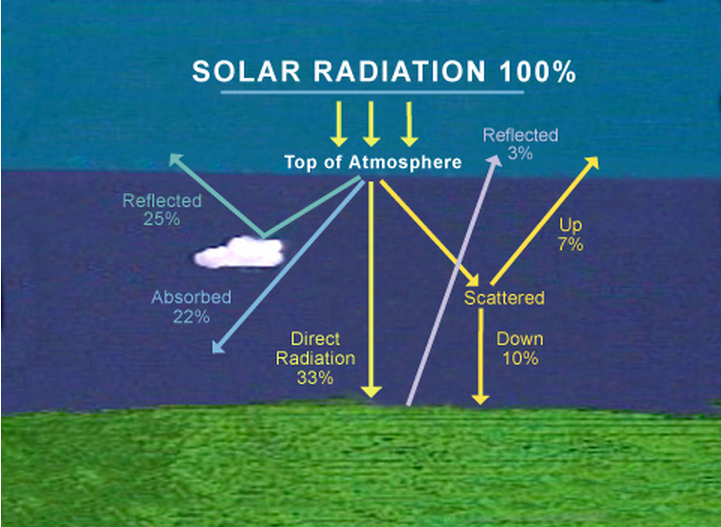 Solar radiation absorbed by greenhouse gases, which is later released- causes heating of the atmosphere.

There are multiple proposals to make this happen, ranging from improbable ideas of placing huge reflective mirrors, spraying a fine mist of sea water and chalk and, injecting reflective aerosols like sulfur dioxide (SO2) or titanium dioxide (TiO2) in the upper atmosphere (stratosphere). Stratospheric Aerosol Injection (SAI) for SRM (SAI-SRM) is the most popular approach under consideration and the supporters of this technology cite the global cooling effect because of sulfur in the volcanic ash spread over the atmosphere after the eruption of Mount Pinatubo in 1991. Thus, proponents of SRM argue that injecting SO2 in the stratosphere via aeroplanes or high flying balloons has the potential to reflect solar radiation back into space and help cool the Earth. 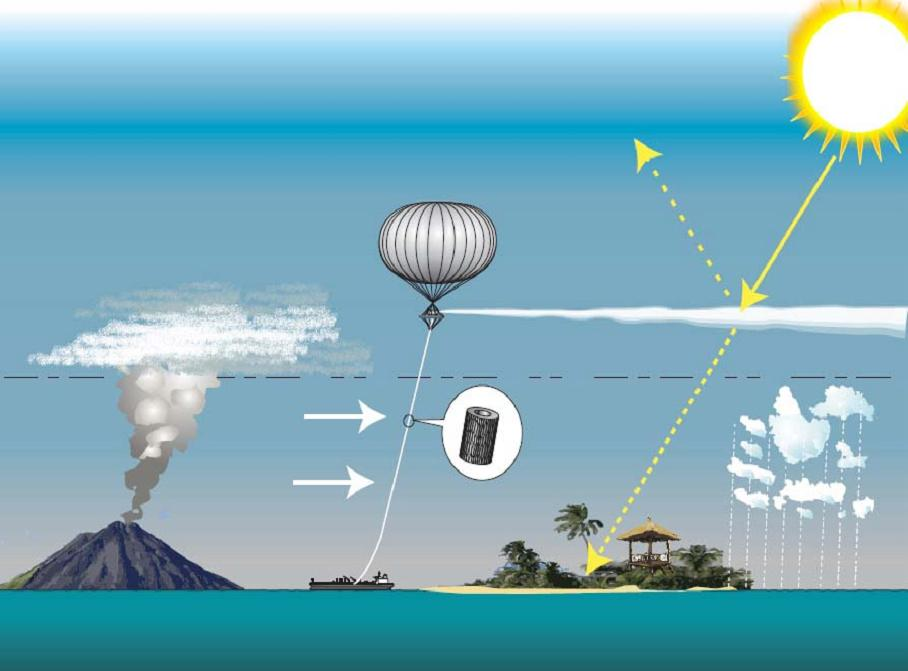 Solar Radiation Management (SRM) is a geoengineering technique to cool down the Earth. This may be achieved by releasing aerosols into the stratosphere, which then reflect some of the incoming solar radiation

Several academic institutions such as Harvard University have teams working on solar geoengineering. This geoengineering briefing on the Stratospheric Controlled Perturbation Experiment (SCoPEx) lists the supporters and funders of controversial technologies like SAI-SRM.

Key risks and challenges to SRM to mitigate global heating

The proposal to put in place huge space mirrors is very impractical considering the tremendous energy required to put those mirrors up in space which will come from fossil fuels. Thus, a solution to global heating, a subset of climate crisis, cannot rely on the same factors that are the cause of climate crisis.

Aerosols of SO2 that would be released as part of the SAI-SRM approach could have devastating environmental, and geo-political and economic effects globally. Scientists have argued that SAI-SRM cannot be tested without full scale implementation and thus they have conducted computer simulations to find out the likely impact of a large scale global deployment of SAI-SRM. Their results are briefly discussed here. It is unlikely that cooling of the planet will be achieved in a uniform way, thus creating regional hotspots with unintended cooling/heating effects. The total global rainfall would be reduced and the complex pattern of South Asian monsoon can be disrupted, leading to water stress for close to 2 billion people residing in South Asia. We are already witnessing climate crisis induced erratic rainfall in India for the past few years and a technological solution to global heating, that can further aggravate the issue of rainfall in the subcontinent, would certainly be catastrophic and not very appealing to the public. Implementation of SAI-SRM at global scale could also lead to droughts in sub-Saharan Africa while causing severe flooding in Latin America, putting more than half of the global human population at risk and endangering the tropical forests in Asia and Latin America. A recent study by scientists from the Indian Institute of Tropical Meteorology (IITM) Pune has found that thickening aerosol cover over the South Asian landscape has caused weakening of the Indian monsoon. They report that aerosols from industrial pollution suppress monsoon circulation by disturbing the land-sea temperature gradient and that the phenomena is exaggerated during El Niño years, leading to a reduction in annual rainfall by as much as 17 percent.

Other environmental issues with SAI-SRM would only become evident once the plan is implemented. Little is known about the toxicity of the aerosols and their safe levels with respect to occupational and public health, and this study on exploring the potential human health impacts of geoengineering (particularly with respect to SAI-SRM) advocates a comprehensive risk assessment of SAI-SRM before it receives any further consideration.

Furthermore, while we reduce global temperatures with SAI-SRM, the amount of greenhouse gases would continue to rise owing to our current energy-intensive lifestyle. For this approach to work, periodic injection of aerosols in the stratosphere is required which is very capital intensive and not every nation-state would be in a position to afford the same. If the system was to fail suddenly due to technical, political, economic or natural factors, it would lead to sudden increase in global temperature. Many plants, animals and human societies would be unable to adapt to this sudden rise in temperature and the resultant climate change and hence would disappear. To ensure the system functions and continues to prevent the heating of the atmosphere, SO2 would need to be injected for decades, centuries or even millenia, effectively making the entire humanity and all life on Earth, dependent on a large technological manipulation of the climate which is in turn dependent on a finite resource (Sulfur) on Earth. SAI-SRM is associated with such risks and regionally diverse impacts that reaching a global consensus and maintaining it over centuries would be a huge challenge. If no global consensus is reached or maintained, it poses uneasy questions of the governing rights of SAI-SRM and the right of self determination of economically poor and vulnerable sections of the human society for or against SAI-SRM. In the absence of international coordination to such a technology, it poses a grave threat to world security and could lead to armed conflicts over the use of the technology. The SAI-SRM technology could also be used as a war weapon against enemy territories. It is crucial to note that the economically and militarily most powerful nations today possess the infrastructure and the resources to deploy SAI-SRM at scale. In a world where climate crisis has become a reality of everyday life and fast degrading nature and natural ecosystems, if democratic processes to reach a consensus on technologies like SAI-SRM becomes difficult to arrive at, it might be endearing for the powerful nations to press ahead with the implementation agenda at global scale. Therefore, it is of utmost importance to arrive at an international consensus over the implementation of technologies and those that possess huge risks for the environment and global community ought to be outright rejected by the international community. These technological fixes for climate crisis are very endearing to its supporters as it allows us to continue with the current exploitative ways of human society, and the project entails huge profits for the firms/governments implementing it at global scale.

Like in the case of marine geoengineering and land-based geoengineering, it is clear that SRM too is not the correct long term solution to climate crisis and it poses more risks to the environment and the international order of consensus than the potential of solution for global heating. Thus, based on the currently available technologies, it is safe to say that the only meaningful way to mitigate climate crisis is by a drastic reduction in our fossil fuel consumption and altering our lifestyle to low energy, as highlighted in the Intergovernmental Panel on Climate Change’s (IPCC) Special Report: Global Warming of 1.5°C, chapter 2 and in this report by Climate Land Ambition and Rights Alliance (CLARA).